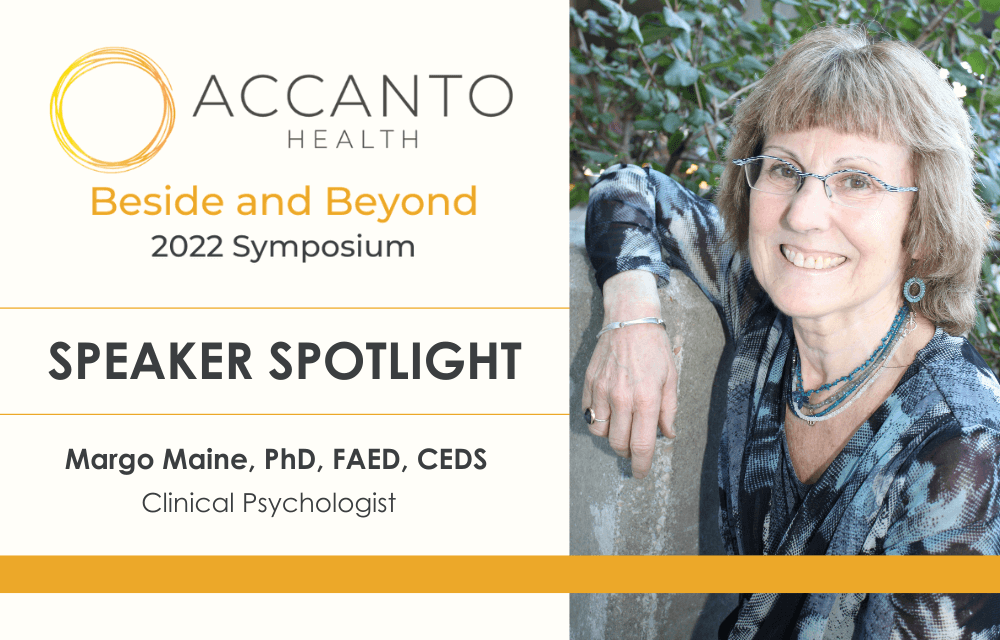 “Eating disorders.” Reading those two words, most of us just visualized a teenage or college-aged girl. And let’s be honest—she’s probably white as well.

Not so long ago, age seemed to immunize adult women from the body image concerns, weight issues, and eating disorders that plague the younger years. Although most cases still appear in adolescent girls and young women, an alarming shift has occurred. Eating disorders have been on the rise among middle-aged and older women. Between 1999 and 2009, inpatient admissions showed the greatest increase in this group, with women over age 45 accounting for a full 25% of those admissions in the United States. Despite this, these women are invisible in our healthcare system. This must change.

The cultural pressures to be perfect—including having a flawless, slim body—have no expiration dates and no boundaries. This pressure is now occurring across age, gender, sexual orientation, race, ethnicity, ability, class, culture, and place. Our fast-moving consumer culture has created unprecedented opportunities and stress for women. Despite growing economic strength, political influence, and educational and career opportunities, a Gallup Well-Being Index indicates that women aged 45 to 64 have the lowest well-being and highest stress of any age group or gender in the United States.

In response to these stressors, far too many women at and post midlife find comfort in the rituals of compulsive eating and exercise, alternating between scrutinizing every morsel they ingest and shamefully bingeing or purging. Often, the eating disorder changes over time, starting with one category of symptoms and moving to another. The issue is less about the specific diagnosis and more about the frequency, intensity, and duration of the symptoms and other contributing factors, such as comorbid substance use, severe mood and anxiety disorders, and trauma.

Eating disorders are serious, life-threatening illnesses—not character flaws. It is time to bring marginalized groups—like midlife and older women who are often ignored in treatment and research—out of the shadows.

Nine Truths About Eating Disorders at Midlife and Beyond

Truth #1: Eating disorders in women at and beyond midlife have rapidly emerged as a major public health problem.

In the U.S., 13.3% of women 50 and older report eating disorder symptoms, surpassing the 12.4% incidence of breast cancer. A recent lifetime prevalence study in the UK indicates that as many as 15.3% of midlife women suffer from eating disorders, yet they hide in plain sight.

Statistics are people with the tears washed away. 15% of women struggling with eating disorders in midlife is a critical, but often invisible issue in our healthcare system.

DNA contributes risk but does not code for a specific condition or disease. In other words, genes create vulnerabilities that are tempered or intensified by other factors. The shared heritable environment is a key force contributing to disordered eating. As eating disorders still occur disproportionately in women, it is safe to say that gender is the greatest risk factor.

Adult women experience countless repeated exposures to the toxic diet culture we live in, but media literacy and prevention efforts focus much more on adolescents and young adults. They are rarely trying to raise consciousness about the risks of disordered eating and body image preoccupation in middle-aged and older women, as well as across gender.

Eating disorders are found on all continents and in a broad range of cultural, racial, and ethnic populations. The world is in transition, so women are in transition.

Truth #4: Age does not immunize women from body image preoccupation and eating disorders.

In the past, women tended to become more accepting and less critical of their bodies as they aged, but in the 21st century, the opposite seems to be true. Today, disordered eating and a fear of aging go hand-in-hand for many women. This issue crosses cultural, racial, and ethnic lines with equal frequency of disordered eating occurring in African American, Hispanic, and Caucasian midlife women in the U.S.

Truth #5: When comparing eating disorders in adult women with those in younger populations, we find some significant differences.

Older women tend to experience significant shame for having a “teenager’s problem.” With more years spent speaking the language of fat, this self-hatred feels normal and admitting the need for help is a foreign concept. Motivation for treatment is also different as they may be concerned about the impact of their eating disorder on their children and hope to not pass it down to them. Due to their many other responsibilities (families, jobs, and their role in their extended families and communities), adult women experience significant obstacles to accessing care.

Adult development ushers in heightened anxiety about appearance and health due to the natural aging process, the loss of power and status as women age, and multiple stressors and losses that accompany adult development. Eating disorder behaviors are powerful distractions from these new challenges and emotions.

Truth #6: Relational Cultural Theory (RCT) is an effective therapeutic framework for the treatment of eating disorders.

Truth #7: The most current findings in neuroscience uphold the basic tenets of the relational model.

RCT challenges the paradigm of the separate self in traditional psychological theories and views isolation as the major source of suffering for people. Similarly, neuroscience has found that the human brain is “hardwired to connect,” and that isolation causes the human brain to deteriorate and waste away. Both RCT and interpersonal neurobiology propose that recovery can only happen in the context of healthy relationships that provide mutual growth.

Truth #8: Adult patients suffer the same medical sequelae as younger patients in that every system is affected by malnutrition.

Truth #9: Psychoeducation is a powerful tool for the treatment of eating disorders at midlife and beyond.

Women at and beyond midlife deserve to be treated as adults and empowered in treatment—not simply told what to do. A psychoeducational approach is essentially relational in that it levels the power differential, increases the mutuality of the clinical relationship, and makes women more effective collaborators in their care. When I share information about the incredible natural resources of the female body, women slowly begin to appreciate its natural wisdom and are more likely to make changes in their attitudes and behaviors.

Not long ago, breast cancer also was hidden in the closet. Women tended to feel isolated, abandoned, and hopeless. But then, brave patients, medical providers, women’s health experts, researchers, and others began talking openly about it. Gradually, the shame faded. Research trials, treatment innovations, early detection through mammograms and self-examination, and support services grew. Today, women with breast cancer do not feel so alone. New knowledge and care options are cause for optimism.

As with breast cancer, age does not lessen the risk for developing an eating disorder, yet the women suffering remain invisible, hiding in plain sight. Eating disorders at midlife and beyond should be a high priority on our healthcare agenda. Medical providers, insurers, and government agencies must learn about the unique female physical and psychosocial experiences that create risk for eating disorders at midlife and beyond. Screening should be routine and include simple questions about weight fluctuations, dieting, nutrition, body image, anxiety, and life stressors. This is not just the job for pediatricians. Obstetricians and gynecologists, family practitioners, internists, and even geriatricians all have a vital role in the fight against eating disorders.

Given the competing demands of their families, jobs, and financial resources, adult women face multiple barriers to treatment. We must make it easier for them to access care. Mental health clinicians and dietitians need to collaborate with medical providers to develop resources for these women.

Women also need to feel safe telling the stories of their bodies. Just like breast cancer, eating disorders are a life-threatening and treatable disease, not a character flaw. As a society, we all have a role in addressing this critical public health issue. It is time to approach eating disorders affecting women in midlife and beyond just as openly, seriously, and compassionate as we approach breast cancer and other public health problems.

To learn more about eating disorders in women at midlife and beyond, please join us for “Invisible Women: Eating Disorders, Perfectionism & Body Image at Midlife and Beyond,” Dr. Maine’s presentation at the 2022 Accanto Health Symposium. See the full agenda and register today for the event taking place September 14–16 in Atlanta, Georgia.

Margo Maine, PhD, FAED, CEDS, is a clinical psychologist who has specialized in eating disorders and related issues for over 35 years. A founder and adviser of the National Eating Disorders Association and founding fellow of the Academy for Eating Disorders, Dr. Maine is author of Pursuing Perfection: Eating Disorders, Body Myths, and Women at Midlife and Beyond; Treatment of Eating Disorders: Bridging the Research-Practice Gap; Effective Clinical Practice in the Treatment of Eating Disorders; The Body Myth; Father Hunger; and Body Wars. She is currently writing a book about women’s relationship with their hair, a neglected aspect of body image. Hair Tells a Story: Hers, Yours & Ours will be published by McFarland Books in late 2022. The 2007 recipient of The Lori Irving Award for Excellence in Eating Disorders Awareness and Prevention, 2014 recipient of the Don and Melissa Nielsen Lifetime Achievement Award and 2015 NEDA Lifetime Achievement Award, she served as senior editor of Eating Disorders: The Journal of Treatment and Prevention for 25 years. A former board member and vice president of the Eating Disorders Coalition for Research, Policy and Action, Maine is a 2016 Honoree of the Connecticut Women’s Hall of Fame. She lectures nationally and internationally on eating disorders and maintains a private practice, Maine & Weinstein Specialty Group, in West Hartford, Connecticut. She loves the Earth and gets up early every day to celebrate it.