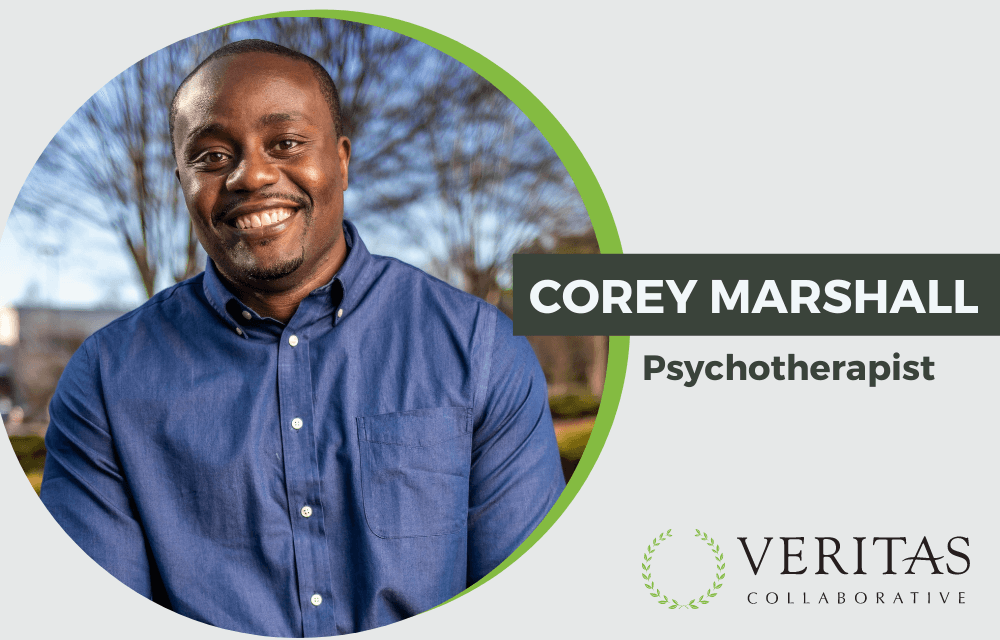 Tell us about yourself!

Hello, I’m Corey Marshall, LMSW, and I’m a psychotherapist at the Atlanta Hospital and Center. I started at Veritas Collaborative as a therapeutic assistant in May 2019. I was promoted to Site Trainer in April of 2020, then transitioned to Psychotherapist in April 2021.

Describe the path that led you to Veritas.

I started college with no intentions of working in mental health. My parents urged me to pursue being a doctor, lawyer, or something finance-related. It wasn’t until after leaving school and spending time in the military that the idea of becoming a therapist came to fruition. The second I switched my major and started taking the necessary classes, I fell in love. I ended up graduating from Georgia State University in 2017 with bachelor’s degrees in both psychology and sociology. I decided to go to complete the Master of Social Work program at the University of Georgia (UGA). While there, I learned from some amazing professors that helped shape my understanding of what a therapist should be. Had I not gone to UGA, I also probably wouldn’t be at Veritas today. I took a shot by applying after our counselor sent us an email advertising the therapeutic assistant position for a behavioral health facility I’d never heard of, and the rest, as they say, is history.

What piece of advice would you give to those struggling with eating disorders?

Patience and discipline are the keys to getting you through this. In my experience, most just want to live like the typical person their age. Unfortunately, that won’t happen just by waking up and feeling that way. It will take routine. It will take commitment. And it will take trusting your ability to do the work.

What’s one thing most people don’t know about you?

Most have no idea that I was in the United States Navy for eight years. I was a Master-At-Arms, which is basically a law enforcement officer. It was a rough but rewarding eight years.

What do you like to do when you aren’t working?

I’m a husband and father, and I appreciate any time I get to spend time with my family. Outside of that, I’m a bit of a culinary nerd; I love to cook and explore different cuisines. I’m also a huge cinephile and I probably spend more time watching movies than I should. I have a massive basketball obsession and have been suffering under my New York Knicks fandom for 20 hard years. I’m also an anime nerd and am often called “basic” for my anime favorites but I don’t care. I’m a big fan of Naruto, Hunter x Hunter, and MHA. I’ve also started the arduous journey of watching One Piece.