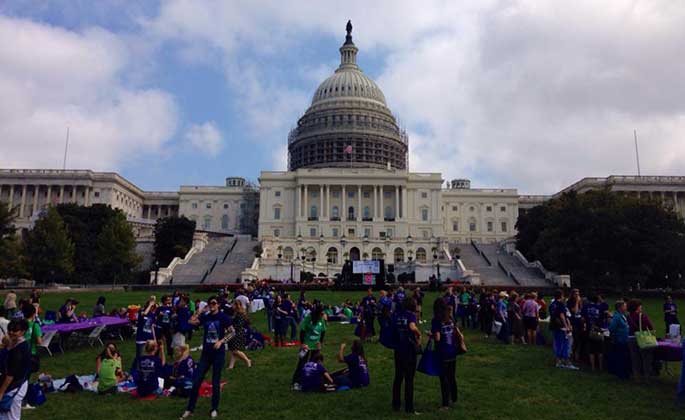 Last Tuesday, September 30th 2014, I had the pleasure of traveling with several co-workers to Washington D.C. to attend the first annual M.O.M. (Mothers and Others) March on the West Lawn of the U.S. Capitol – and wow, was it powerful.

The speakers at the march were brave and honest, sharing stories of barriers eating disorder patients experience on the road to recovery. Several mothers spoke out about their child’s eating disorder not being taken seriously by his/her primary care physician. Lisa Kantor, an insurance attorney based in California, spoke on behalf of her clients who have filed lawsuits with their insurance companies after not receiving adequate coverage. However, the most eye-opening and emotionally moving moment of the MOM March experience, for me, was looking out across the lawn at the speckles of green amid a sea of purple. During the registration process, each person had to select a t-shirt color. If you selected a purple t-shirt, that signified that you or someone you know has battled an eating disorder. If you selected green, it meant that your loved one had passed away as a result of their battle. We know that at least 23 people die every day as a direct result of an eating disorder – which is one person every 62 minutes (S. Crow and S. Swanson). And yet, there are still those who do not accept eating disorders as the life-threatening illnesses they are.

The inaugural march was hosted by 3 organizations: The Eating Disorders Coalition (EDC) who advance the recognition of eating disorders as a public health priority at the federal and state level, Mothers Against Eating Disorders (M.A.E.D.), and The Alliance for Eating Disorders Awareness. In addition, 10 treatment facilities (including Veritas Collaborative) and 27 non-profit organizations sponsored the event. Over 600 people were a part of the march (in D.C. and online) for a day of inspiration, empowerment, and advocacy. (For a moment during the march, #MarchAgainstED was trending on Twitter!)

The M.O.M. March was the perfect segue into the fall EDC Lobby Day the following day. The EDC educates Congress about eating disorders and urges them to use their legislative authority to support policy solutions. Veritas Collaborative (and North Carolina) representatives, Chase Bannister, Vice President and Chief Center Officer, and Outreach Associate, Veronica Burr, along with Gail Schoenbach (of New Jersey), Founder of the FREED Foundation, joined together with family members of individuals who have suffered from eating disorders to meet with Legislative Assistants from the offices of Congressman David Price and Senator Kay Hagan. The group’s primary goal was to gain support for the FREED (Federal Response to Eliminate Eating Disorders) Act (H.R.1193), a comprehensive bill addressing the research, treatment, education, and prevention needs required to eliminate eating disorders.

I think I can speak for the rest of my colleagues in saying that the time we spent with eating disorder survivors, parents whose children have suffered from eating disorders, advocates, doctors, therapists, researchers, and other professionals who have devoted their careers to this important field was truly inspirational.